Community Collaborators is a new blog series, where we hear from companies at GridAKL working together on exciting projects.

When you’re setting up your own business, it’s easy to get absorbed into your own work. You’re passionate about what you do and refining your niche. If you work alone, however, or within a specific group, you may be limiting yourself and your company. More connections, collaborations, and innovative thinking are most likely to lead you to a more profitable business.

As identified by Entrepreneur.com, coworking provides numerous ways to connect with others to the benefit of your business. Humans naturally thrive from interacting with others, including collaborating and competing with each other.

As part of our “Community Collaborators” series, we spoke to two coworkers from GridAKL / John Lysaght who worked together on an exciting project.

Ragequit Studios first arrived at GridAKL via Auckland’s Media Design School. As students, the team were given the tools and knowledge to succeed in the video gaming industry. After participating in the MDS accelerator programme, they were also supported with a space at GridAKL to work on releasing their game to a commercial audience. Although initially a dedicated gaming studio, working at GridAKL made them consider other possibilities, as founder and director Scott Thomson says “Talking to the business owners in the coworking space made us think we could do more with our skillset.”

One business owner who was seeking such skills was James Muir, founder of Crunch and Flourish, a tech business helping online shoppers make decisions aligned with their environmental concerns. James’ team have recently launched the Packaging Star, helping consumers to understand product packaging and encouraging brands to improve, and were looking for ways to communicate what their service can do in an easy to understand way.

“We really needed to find a way to articulate what we were doing, which was a real problem for us.”

The turning point for Crunch and Flourish came when a team member suggested making an animation, demonstrating what the Packaging Star can do.

James had just a week before he needed to launch the website, so he turned to our Community Manager, Pauli Sosa, for help. “There’s no way Scott and I would have found each other unless there was a team here who know the businesses and what’s going on.”

“Pauli asked me if I do animations, knowing the game design skillset, and knowing that I’m a UI and graphic designer too,” says Scott, who subsequently met with James to talk about the project. 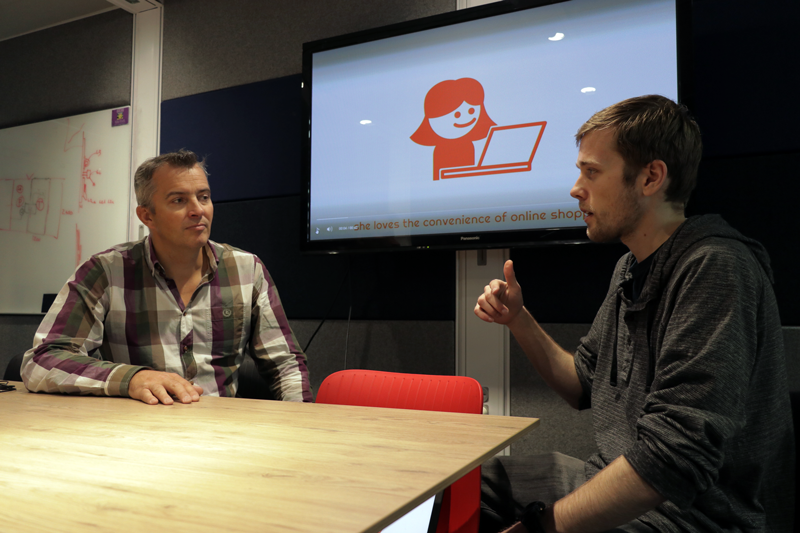 After the first meeting, James and Scott had storyboarded most of the animation and decided upon a minimalist style, familiar within the New Zealand retail grocery market.

“Since we were both working at GridAKL, we could just message over Slack, and we’d grab a meeting room. We drew a few scribbles and came up with the full storyboard.” Scott was then able to quickly produce the animation James was looking for, and give his advice on style, design and length.

One of the biggest challenges James and Scott had was a tight deadline. However, working in the same space meant that questions either way could quickly be answered, and the project could be completed in the short timeframe.

“We’d also spent a lot of time getting our service into the right place to be simply communicated.” Having clarity from user-testing meant that James and his team had a very clear idea of what content needed to be covered in the animation, which made it easier to communicate to Scott exactly what they needed.

Following the success of their first collaboration, Scott and James are keen to help each other out in the future and collaborate on animation projects.

Collaborating had also opened their mind to what could be possible with other coworkers. As James observes, “There’s a whole bunch of people here who just want to help each other out. I try to connect with others and help connect other people.”

“It’s like never-ending networking with other businesses,” Scott agrees.

This post is part of the Community Collaborators series at our start-up hub. This post was written by Laura Briggs, part of our Community Team at GridAKL / John Lysaght.

As kiwis settle into staying home, shopping continues – now via e-commerce. It is not surprising then that GridAKL residents Goose are experiencing strong growth as a direct result of...